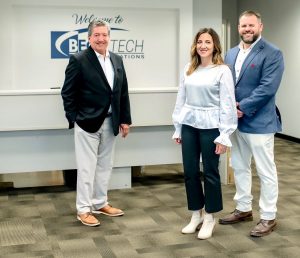 BeckTech Communications has announced that Matthew Beck will retire as Chief Executive Officer of the company effective December 1, 2022. Beck, 67, will continue to serve the company in an advisory role as part of the company’s succession plan. Brit Miller is the new owner/CEO and Christine Chandler has been named Chief Operating Officer. Beck has worked in the telecommunications industry for 46 years.

Beck began his career in 1977, working with Motorola in Minneapolis, Minn, before returning to Decatur to join his father, Darrell Beck, at McKeever Communications. In 1998, Beck founded BARBECK Communications, which transitioned to BeckTech, in 2019.

“I have truly enjoyed a lifetime of working in the rapidly advancing wireless industry,” said Beck. “I’ve been part of a lot of milestones, including bringing the first cell phones to our region as a Verizon wireless partner with 20 retail stores. Today, we’ve come back full circle with technological advanced two-way radios and state-of-the-art security camera systems.”

“I’ve always hoped to see another generation of our family lead this company,” continued Beck. “It is a blessing to watch Brit and Christine take over the helm of BeckTech.” Brit Miller, 36, Beck’s son-in-law, is the new owner/CEO. Miller has more than 8 years of senior management experience, including leading BeckTech’s regional sales team.

Miller, a graduate of the University of Illinois and Eisenhower High School, played 4 years in the NFL with the St. Louis Rams, where he was a Special Teams Captain. “Being the next generation of the Beck family to lead BeckTech is truly an honor and a privilege,” shared Miller. “Especially because we are a family business, I know that I have big shoes to fill. I also know the work we have done to prepare for and ensure a smooth transition. We have built a team that has been successful, even during challenging times, and I look forward to seeing what the future holds for BeckTech.”

Christine Chandler, 39, Beck’s daughter, has been named Chief Operating Officer. Chandler has more than 15 years management experience, including 4 years with BeckTech. She previously was an account manager with ADM and has a bachelor’s in business/corporate communications from Millikin University and a master’s in organizational leadership from Grand Canyon University.

The communication’s company has 4 offices in Central Illinois and 26 employees. BeckTech, formerly known as BARBECK Communi-cations, was formed in 1998. BeckTech specializes as a Motorola Solutions Provider, ESI phone systems and various brands of security camera systems.