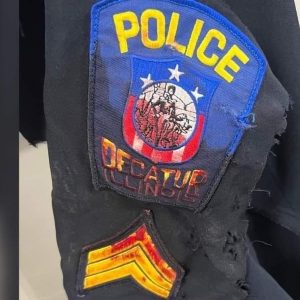 The Decatur Police Department is releasing the names of the officers involved in the shooting incident on 10/12/2022. The Department appreciates the public’s patience with this identification, as the officers and their families needed time to start processing this incident as well as receive medical care related to their injuries. All four officers involved did fire their weapons during this incident. The officers that were involved in the shooting incident on 10/12/22 are identified as the following:

In addition, with permission from Sheriff Root, the Macon County Sheriff’s Deputy involved in the shooting incident is identified as the following:

The Decatur Police Department also wants to share the condition of the wounded officers with the public. Sgt. Wittmer was shot multiple times during this incident. Officer Bowman was shot one time during this incident. Neither Officer Ricker nor Deputy Wolfe were hit by gunfire. Both Sgt. Wittmer and Ofc. Bowman have been released from the hospital and are recovering from their injuries.

Police Chief Shane Brandel also attached a picture that was taken at the hospital after our officers were shot. This is a section of Sgt. Wittmer’s blood-stained uniform. Although it may be difficult to look at, it should serve as a reminder to this community, our state, and our country of the level of dedication police officers have, and their willingness to sacrifice their very lives to keep our communities safe.