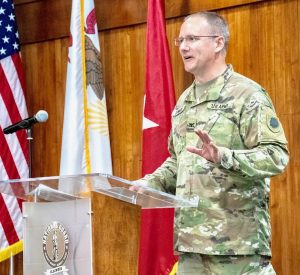 Illinois Army National Guard Soldier Randy Edwards, of Decatur, Illinois, was promoted to colonel in a ceremony Aug. 18 at the Illinois Military Academy on Camp Lincoln in Springfield, Illinois.

“In the military, we see Soldiers who are destined to do great things in the organization,” said Brig. Gen. Rodney Boyd, of Naperville, Illinois, Assistant Adjutant General – Army and Commander of the Illinois Army National Guard. “Randy you have always stood out in front and you are destined to do great things. He stepped into a big role as the Director of Plans, Training, and Operations, but has made the position his own. Congratulations on this great achievement, but you are only at the tip, we have a lot planned for you.”

Boyd also thanked Edwards’ family for their support throughout his career.  “Thank you for supporting Randy over the years,” he said. “Without the support of our families, we can’t continue to serve our communities, our state, and our country.”

Edwards, who enlisted in the ILARNG as a petroleum supply specialist in 1993, serves as the Director of Plans, Training, and Operations for the Illinois Army National Guard. He attained the rank of Staff Sergeant before receiving a direct commission in the Illinois Army National Guard as a Quartermaster Corps officer in 2002. In 2009, he changed his primary branch to engineer and in 2011 he was awarded the logistics branch.

“I am honored to be selected as the Director of Plans, Training, and Operations and humbled by this promotion,” Edwards told family and friends.

“I had planned on retiring as a major, but my wife told me to bring things down a notch and good things will happen.” Edwards said he capitalized on his strengths and worked on his weaknesses.

“Things fell into place,” he said.

Edwards thanked his family, wife Heather, children Gable and Cora, his parents and his parents-in-laws, for their support over the years. “Heather, thank you for believing in me,” he said. “Cora and Gable, I am proud of both of you for all you have accomplished and all you are yet to accomplish.”

Edwards also thanked his mentors, including retired Maj. Gen. Michael Zerbonia. “Thank you for always pushing, encouraging and believing in me,” he said. “To my G-3 team, each of you are rockstars and I am blessed to have an extraordinary team.”

Edwards, a full-time Active Guard and Reserve Soldier, has served in a variety of positions throughout Illinois, including quartermaster company platoon leader and executive officer, Engineer Battalion Plans Officer, Assistant Operations Officer, Collective Training Branch Chief, Force Integration and Readiness Officer, Future Plans and Readiness Division Chief, Mobilization Readiness Officer, and Deputy Director of Plans, Training, and Operations. He served as commander of the 766th Brigade Engineer Battalion, based in Decatur, and commander of Company A, 634th Brigade Support Battalion, based in Mattoon, Illinois. As commander of Company A, Edwards deployed to Iraq in support of Operation Iraqi Freedom and to Louisiana in support of Hurricane Katrina.

“I learned so much in each of my command positions,” Edwards said. “It was tough, but I wouldn’t trade it for anything.”

Edwards is a graduate of Illinois State University, Normal, Illinois, with a Bachelor of Science degree and is enrolled in the U.S. Army War College Distance Education Program.