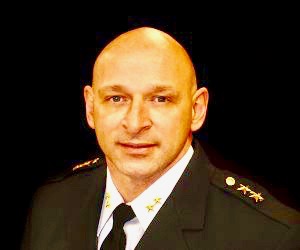 Richland Community College has announced that Jim Getz has been named as the Commander of the Macon County Law Enforcement Training Center (MCLETC).

Dr. Cris-tobal, President of Richland Community College, said “Given his superlative ca-reer at the Decatur Police Department, we are elated to employ Mr. Getz as Com-mander at MCLETC. Beyond his long-tenured and excellent work in local law enforcement, I am most impressed with Commander Getz’s straight forward approach to leadership, high integrity, and commitment to providing the best training atmosphere for peace officers and corrections officers in the entire State of Illinois. Through his service at Richland, Jim will continue to serve this community and positively affect the entire Law Enforcement and Corrections sectors in Illinois.”

Commander Getz added, “I look forward to the opportunity to train the future police and correctional officers in the State of Illinois. We want to build Officers that are true public servants to all people in their community.”

Before coming to MCLETC, Getz served the local community with the Decatur Police Department for 22 years, serving as its Chief of Police from 2016 to 2021. He retired in July 2021. In addition, he worked as a Correctional Officer with the Illinois Department of Corrections from 1995 to 1998. Commander Getz is a graduate of the University of Illinois at Springfield. He completed his Basic Law Enforcement Training at the Illinois State Police Academy in 1999 where he was also the Class President. Commander Getz is also a graduate of the FBI National Academy Class 271.

“Richland Community College did an outstanding job of selecting Commander Tad Williams four years ago to develop and lead MCLETC in the training of officers throughout the state. Since Commander Williams’ retirement, Richland Community College selected another outstanding leader, Commander Jim Getz, to lead MCLETC into the future. Commander Getz has honorably served his country in the United States Army and served his community as a police officer and Chief of Police in Decatur, Illinois. With Commander Getz’s credentials he could easily lead any Municipal, State, or Federal agency, but instead he has chosen to accept the position of Commander at MCLETC, which will allow him to mentor new officers from all over the State of Illinois, so that they are ready to serve and protect their communities, said Thomas Schneider, Deputy Commander, MCLETC. MCLETC is currently training its 15th recruit class since opening in September 2017.

Recruit Class 22-15, comprised of over 65 recruits from all over Illinois, will graduate from the 560-hour Basic Law Enforcement Academy on Friday, April 15, 2022. Thomas Schneider, who served as Acting Commander after the retirement of Tad Williams in October 2021, will return to his previous role in the Deputy Commander position. Ed Culp serves as the Director of Training and Dennis Arnold serves as Class Coordinator.