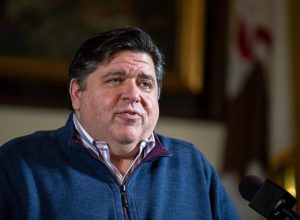 SPRINGFIELD – Gov. JB Pritzker on Wednesday offered a $45.4 billion general revenue budget plan for the upcoming fiscal year that would include new spending on education and health care while also providing about $1 billion in tax relief that he said would soften the impact of inflation on Illinois consumers.

In his budget address delivered from the Old State Capitol in Springfield, Pritzker claimed credit for the state being in its best fiscal condition in decades.

“After decades of credit downgrades by the end of my second full fiscal year in office, Illinois received two credit upgrades. The first upgrades the state has received in over 20 years,” he said. “The massive bill backlog that contained bills past due for as long as 500 days now contains only unpaid general fund bills averaging 15 days old.

“And that $3.2 billion structural deficit, well today I’m pleased to announce Illinois will end this fiscal year with a $1.7 billion surplus, the first of its kind in more than 25 years.”

Budget addresses are normally delivered in the House chamber of the Capitol before a joint session of the General Assembly. But the location was changed because lawmakers had canceled in-person sessions for the week due to a major winter storm that swept through central Illinois Tuesday night, making travel hazardous in many parts of the state.

It was Pritzker’s fourth and final budget address of his first term in office and the second one colored by the COVID-19 pandemic. Last year, Pritzker delivered a prerecorded speech from a building on the Illinois State Fairgrounds that was being converted for use as a mass vaccination site.

Budget officials currently project the state to take in $45.8 billion in revenue during the year, which includes $4 billion in federal funds and nearly $2 billion in statutory transfers into the general fund from other funds, such as lottery and marijuana revenues.

Among those in the room for the speech were health care workers, and Pritzker spent part of his speech praising them for their work.

“So many of you have showed up to work in person during the worst health crisis in our state that our state has ever seen,” he said. “I figured the least I could do as your governor was brave a snow storm, to deliver the State of the State address.”

Included in the budget are initiatives aimed at expanding the state’s health care workforce. Among those is a $25 million program called the Pipeline for the Advancement of Healthcare, or PATH, workforce program to help community colleges train nurses, technicians and other high-demand health care personnel.

It also includes a $180 million Healthcare Workforce Initiative directed at hospitals, clinics and other providers to pay for staff bonuses, continuing education, training and staff retention and recruitment.

And, as the administration had announced earlier, the plan calls for a one-year holiday from the state’s 1 percent grocery tax, a one-year cancellation of the scheduled inflationary increase in the motor fuel tax and a 5 percent property tax rebate to an estimated 2 million qualifying homeowners that would be in addition to the property tax credit they can claim on their income taxes.

This year’s speech was also Pritzker’s first major public address of his re-election campaign and portions of it took on a decidedly political tone, taking credit for the state’s improved financial condition while brushing aside his opponents and critics.

“What a self-indulgent position the cynics take, always opposing what’s in the best interest of the people of Illinois, if they think it will advance their political standing,” he said. “It’s a curious position. But then again, there have long been people in Illinois state politics who have cared more about promoting their own propaganda than they do about what’s best for your pocketbooks. During this budget cycle especially, seats at the grownup table will be off limits to those who aren’t working in the public’s best interests.”

His speech and budget proposal also drew predictably partisan reactions from Republicans, including Jesse Sullivan, a GOP candidate for governor, who called the proposed tax relief package “nothing more than attempted bribery” and “a classic election year tactic.”

“The governor’s budget address is always a wish-list, and this year it’s clear that the governor wishes to be reelected,” he said. “The budget laid out by Gov. Pritzker today is packed with gimmicks and one-time tricks, but no structural reforms.”

Meanwhile Democrats, who control both chambers of the General Assembly with supermajorities, universally praised the budget plan.

“The governor’s budget address lays out a clear path to continue moving our state toward financial stability and surety while prioritizing hardworking Illinoisans,” House Speaker Emanuel “Chris” Welch, of Hillside, said in a statement. “I could not be more proud of this state and the significant progress we’ve made in such a short amount of time.”

“I’m not accustomed to good news in a budget speech,” Senate President Don Harmon, of Oak Park, said in a separate statement. “This is a budget proposal unlike any I’ve seen in my time in the Senate. It speaks to the work we’ve done, together, to bring stability to our state finances. That stability allows us to invest back in our state and provide relief to those hit hardest by the pandemic and associated economic downturn.”

Industry groups, on the other hand, had mixed reactions to Pritzker’s budget plan.

Health care groups like the Illinois Primary Health Care Association and the Illinois Medical Society praised the budget plan for investing in the state’s health care workforce and Pritzker’s plan to pay down past-due bills in the state employee health insurance program.

But the Transportation for Illinois Coalition, made up of business, labor and infrastructure groups, warned that canceling the scheduled increase in the motor fuel tax could have a long-term impact on future road construction and maintenance.

And Illinois Hotel and Lodging Association President and CEO Michael Jacobson issued a statement saying he was disappointed that the budget plan did not include any additional relief for the hospitality and tourism industry, which he said was particularly hard hit by the COVID-19 pandemic.

Lawmakers will spend the next several weeks holding committee hearings with state agency officials in order to craft a final budget plan. They are scheduled to wrap up their work by April 8, leaving them time to campaign for reelection ahead of the June 28 primaries.