• As vaccination numbers slowly increase in Macon County and across the nation, some people who have received their shot apparently believe they can quit wearing a mask or practicing social distancing. Vaccines are one of the most important tools in fighting the COVID-19 pandemic and early indicators show that they are effective at preventing illness, severe disease and death.

According to Stephen Hippler, M.D., who is the chief clinical officer for Peoria-based OSF HealthCare “more research is needed to see if vaccinated people can still become infected without symptoms, allowing them to spread the virus to others who have not been vaccinated yet. Even though it sounds logical and reasonable that a vaccine should prevent you from being a carrier and passing it on, until we have proof, I think we should really be safe and smart and continue to wear masks.”

He added that the additional benefit we have seen this year from masking is the unprecedented decrease in the incidence of Influenza and respiratory syncytial virus (RSV), so masking seems to have a benefit for other respiratory-transmitted viruses. All the more reason, he says, to not become complacent with masking, physical distancing and hand washing after receiving a COVID vaccine. I think that’s pretty solid advice for all of us.

• THERE was some surprising news in the race for three Decatur City Council seats last week when one candidate, Anthony S. Chapple, filed a withdrawal of candidacy in the office of the Macon County Clerk on February 2, 2021. The February 23, 2021 Consolidated Primary ballot will still have Chapple’s name on it, however his name will not be on the April 6, 2021 Consolidated ballot.

Macon County Clerk Josh Tanner said that a notice will be placed in the polling place alerting voters to the fact that Chapple has withdrawn from the February 23, 2021 Consolidated Primary election. With Chapple’s withdrawal, the number of candidates, including the write-in candidate, is now at 12, which ordinarily would not necessitate a primary election in a city council race.

Unfortunately, tens of thousands of dollars have to be spent to hold the primary election Feb. 23, even though only 12 candidates are left. Of course, the primary has to be held anyway, especially because of state statue — and, the fact that some people already early voted. Now the 12 candidates left hope to make it through the primary where the six candidates with the most votes will move on to the Consolidated Election on April 6th.

Although unlikely, at this stage, if it so happens that Chapple finishes in the top 6, I assume there would only be five candidates moving on to the Consolidated Election, since Chapple has already withdrawn and his name will not be on the April 6th ballot. This council race has really been “different” this year. Of course, it started in 2020 and a lot of what happened in 2020 was “different” from the norm.

• HOPEFULLY by the time you read this column, we will have more COVID-19 vaccine and vaccination locations in Macon County. There is no shortage of residents who qualify to receive the vaccinations. There is a shortage of supply and that’s not the fault of local organizations. In fact, other newspapers are reporting shortages of the vaccine in their areas compared to the number of people wanting to get vaccinated.

Here’s the first two paragraphs of a vaccination story by Wendy Martin that appeared last Wednesday in the Mason County Democrat in Havana, Illinois: “It was pretty well guaranteed that more people would be unhappy than happy with the roll out of Mason County’s first vaccination clinic sign-up for group 1b—persons age 65 and older.

“Perhaps residents should have been warned that while nearly 3,000 of them want a shot, there were only 200 vaccines available. The online sign up opened at 5 p.m. on Wednesday, Jan. 27, and all 200 available slots were filled within five minutes.”

Sound familiar? Whether it was in Mason County or Macon County, or most other counties, there’s been a lot of frustration by many residents who are finding it difficult to get vaccinated — mostly because of a limited supply of vaccine. Look for that to change in the coming days as more vaccine becomes available. There’s already a growing number of places to get vaccinated but not nearly enough to satisfy the demand. Many seniors are complaining that going online to make an appointment is stressful since they are not computer-savvy. 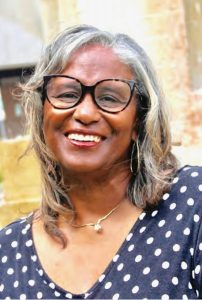 • TURNER CHOSEN — On Saturday, February 6th, the 48th Legislative District Committee met to discuss the qualifications of the eight finalists for the State Senator appointment. All eight candidates were highly qualified, and it made for a tough decision for the Committee. In the end, one candidate stood out above all else. The Democratic County Chairs’ of the 48th Legislative District Committee voted unanimously to appoint Doris Turner to fill the remainder of the term for State Senator.

Committee Chair Pam Monetti, Chair of the Macoupin County Democratic Party, released the following statement: “I am proud of the work that the 48th Legis-lative District Committee has done in selecting Doris Turner for the appointment. From the start, we wanted to make sure that this was an open and transparent process. We wanted to make sure that the candidate we selected would share our values and commitment to our communities. We wanted to find someone who would be a bold fighter for the families in the 48th District. We know we found that in Doris Turner.”

Newly appointed State Senator Doris Turner released the following statement: “I am thankful to receive the support and appointment of the County Chairs’ in the 48th District. This is an honor of a lifetime and not something that I will take for granted. We are facing a difficult road ahead as our state rebuilds from the devastation of COVID-19. The gravity of this will weigh on me every day as I work to get our kids back in school and our businesses reopen. From Bunker Hill to Decatur and everywhere in between, it’s time to roll up our sleeves and get to work.”

• POSITIVE RESULTS from the pandemic? Russ Stuart sent me the following email a few days ago which put a positive spin on what negative news and actions we’ve had to take during the past year. He wrote: “I fully realize the devastating impacts that the COVID-19 virus has had on the entire world. That being said the resulting precautions we have been taking may have themselves created some positive results.

“I can’t help but think the mask wearing and social distancing has cut down on the spread of conventional flu and cold cases. With the schools doing in home learning, possibly our students have better prepared themselves for computer skills in the future.

“Last week our pastor said our tithes and offerings were larger than ever. Staying home more might be helping bond families.”

• FEBRUARY can be a brutal month as we’ve experienced in Decatur and Central Illinois the past week. There is no time in our community when looking out for others is more important than when the temperature falls to sub-zero levels. The homeless and others who are trying to stay warm are often in a battle for survival from extremely cold temps and I’m so thankful for all of the volunteers and organizations who have stepped forward to warm the bodies and hearts of so many in our community. Those efforts have been made even more difficult this year because of COVID-19 and the necessity of maintaining recommended precautions.

• I JOIN Brian Byers on WSOY’s “Byers & Co,” every Thursday morning at 7:00 for the City Hall Insider to discuss the issues impacting Decatur and Central Illinois.

Subscribe to the Decatur Tribune Weekly Newspaper which is loaded with local stories, columns, sports and history. The cost is $40 for one year (52 weekly editions) and you can order it on this website, using your credit card.  Support the independent, locally-owned Decatur Tribune newspaper.