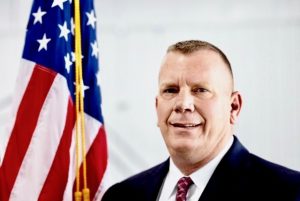 Ed Culp, 52, retired Chief Deputy in the Macon County Sheriff’s Office, has announced that he is running for a four-year term on the Decatur City Council in the Spring election. Culp made the an-nouncement during a press conference at the Decatur Civic Center this afternoon. “After 28 years serving this community, I feel I have much more to offer. I love my hometown and the people who live here,” said Culp. “My obvious knowledge falls in line with public safety which I feel we are very fortunate to have wonderful police and fire staff and command.” “My platform is and always will be local business and ensuring we as a community are doing everything we can to support them during this pandemic. “With that being said, I don’t want COVID to dictate Decatur’s future. We need fresh ideas.”

Culp also said that he would also like to see more growth involving Lake Decatur. “It’s much more than a water resource,” he added. “It should be a destination and during the past summer it’s obvious use to the public was evident. “I take pride in being professional, loyal and having a strong work ethic. I believe those are traits needed on our Decatur City Council.”

Culp, who was born and raised in Decatur and Macon County is married and he and wife, Tonya, have five children and one grandchild. He is a US Marine Corps Veteran and a 2009 Graduate of the FBI National Academy Quantico, VA He retired from the Macon County Sheriff’s Office in 2010 as their Chief Deputy and retired from the Decatur Park Police in 2018 as their Chief of Police.

From 2018 to the present he is Director of Training at the Macon County Law Enforcement Center He is also a previous board member for the Salvation Army and for the Emergency Telephone Safety Board.

• THERE are three council positions up for election. Incumbent Councilmen Chuck Kuhle and David Horn are running for re-election. Councilman Patrick McDaniel told me six weeks ago, and I reported in this column, that he is not seeking another term. McDaniel told me then that “Although I have been honored to serve and represent the citizens of Decatur on the Decatur City Council for the past ten years in working with my fellow council members and city staff in improving the community for the present and planning ahead for the future needs of the community I have decided not to seek another term on the council during the upcoming municipal election.” McDaniel also serves as mayor pro tem and the liquor commissioner — so those two positions will be filled by other council members, or, in the case of McDaniel, one council member.

Although the election won’t be held until Spring filing nominating petitions to get on the ballot takes place less than a month from now. Candidates file those petitions with the city clerk. Nominating petitions must be filed from 8:00 am Monday, November 16, 2020 through 5:00 pm Monday, November 23, 2020. After Nov. 23, we will know, officially, the names of the candidates who are running for the three four-year terms up for election and what names will be on the ballot. That date will be here before you know it The mayor’s position and the three other council positions will be up for election in 2023.

• CONTINUED best wishes and prayers for Mayor Julie Moore Wolfe and her family, after she revealed last week on WSOY’s Byers & Co. that she and a family member had tested positive for COVID-19. She is carrying out her duties from home during the quarentene period. We can be very thankful that, during this pandemic, the technology is available to keep in touch with each other without being around each other.

• THERE’S been some alarming statistics on COVID-19 infections in Macon County and in the State of Illinois — at least as this column is being written. More and more infections are being reported, with more hospitalizations, and I would think, those statistics should cause people to take the pandemic seriously, but way too many people don’t believe it is anything that is serious, or it is a political tactic to defeat President Donald Trump in the upcoming election. Friday, there were 93 newly-confirmed cases of COVID-19 in Macon County and several days before that concerning figure, the number kept going up. It is very frustrating for health officials and other local leaders to see those numbers going up because many residents still will not wear a mask, social distance themselves from others, wash their hands frequently and avoid large gatherings, despite the urgent pleas to practice safe conduct.

• ON Friday, the Illinois Department of Public Health reported 34 counties in Illinois are considered to be at a warning level for novel coronavirus disease (COVID-19). Macon County is one of the 34 counties at warning level. A county enters a warning level when two or more COVID-19 risk indicators that measure the amount of COVID-19 increase. The IDPH stated: “Although the reasons for counties reaching a warning level varies, some of the common factors for an increase in cases and outbreaks are associated with gatherings in people’s homes, weddings and funerals, bars and clubs, university and college parties as well as college sports teams, family gatherings, long-term care facilities, correctional centers, schools, and cases among the community at large, especially people in their 20s.

This is not a political issue. It is a health issue with several side effects besides the obvious infection. Most of the businesses that have not shut down already are struggling to overcome the impact the pandemic is having on their sales and, if increasing positivity numbers continue, restrictions may be implemented that will kill off many businesses that are already borderline. That’s when the tax burden will get heavier as taxing bodies attempt to fund basic community services with ever decreasing tax revenue from businesses that are closing.

• MONDAY, Governor Pritzker and the Illinois Department of Public Health (IDPH) announced that COVID-19 resurgence mitigations will be implemented in Region 5, in Southern Illinois, beginning at 12:01 a.m. on Thursday, October 22, 2020. On Tuesday, it was announced that Regions 7 and 8 are also listed as mitigations will be implemented. The regions are seeing a 7-day rolling average test positivity rate of 8 percent or above for three consecutive days, which exceeds the threshold set for establishing mitigation measures in the region under the state’s Restore Illinois Resurgence Plan. Will our region be next if positivity rates don’t decrease? That’s the direction we are headed which will be devastating to our local economy.

• DESPITE the pandemic I’m still doing the City Hall Insider on WSOY’s Byers & Co., every Thursday morning at 7:00 via phone to keep us safe. Believe it or not, it was the middle of March since Brian and I were together in the broadcast studio. Wow! With the General Election getting closer, and the city council race on the horizon, we always have a lot to talk about. Thanks for your positive comments about our discussions. I always enjoy talking with Brian.

• STAY SAFE everyone. We can get through the pandemic together if we look out for each other and remain positive and strong despite what we are experiencing,