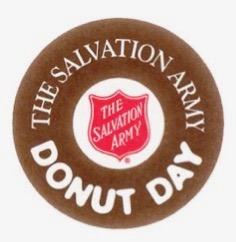 National Donut Day is tied to The Salvation Army and is celebrated on the first Friday of June each year. We celebrate the history back to the front lines during World War I when “donut lassies” made donuts to help support and build moral for soldiers fighting…all the way up to the current programs and impact of The Salvation Army of today that are still on the front lines helping those in need.

This year, we celebrate National Donut 2 days – June 3 & 4. To support The Salvation Army, plan to get your donuts from Giggles in Decatur on Merchant Street on June 3 & 4. Curbside Grab-n-Go is available, but in limited quantity or Pre-order your box of donuts for Pick-up between 11 am and 4 pm each day by calling Giggles at 217-475-1099 or at www.GigglesonMerchant.com. This year choose from: Vanilla with Sprinkles, Vanilla with Chocolate Icing, & Lemon-Blueberry. Take a box home and one to the office.

Look for the Red Kettles in front of Giggles both days to make a donation along with the Salvation Army Emergency Vehicle out in the community on June 3. We will be handing out donuts at a number of the stores where we did Christmas Bell Ringing. Walmart, Kroger, Sam’s Club, Hobby Lobby, Rural King, & Farm and Fleet.

The Salvation Army in Chicago celebrated the first National Donut Day in 1938 to raise funds to help the needy during the Great Depression and to commemorate the work of the “donut lassies” who served donuts to soldiers during World War I.

Each year, the first Friday in June marks an important date in American food history and raises awareness for the critical services that The Salvation Army provides to those in need each day. In 1917, The Salvation Army began a mission to provide spiritual and emotional support for U.S. soldiers fighting in France during World War I. About 250 volunteers traveled overseas and set up small huts located near the front lines where they could give soldiers clothes, supplies, and, of course, baked goods. After discovering that serving baked goods would be difficult considering the conditions of the huts and the limited rations, two volunteers – Ensign Margaret Sheldon and Adjutant Helen Purviance – began frying donuts in soldiers’ helmets. These tasty treats boosted morale and won the hearts of many soldiers. Nicknamed “donut lassies,” the women who served donuts to troops are often credited with popularizing the donut in the United States when the troops (nicknamed “doughboys”) returned home from war.

The Salvation Army is still on the front lines Nationwide and specifically here in Decatur providing food, shelter, & emergency services for those in need in our community.