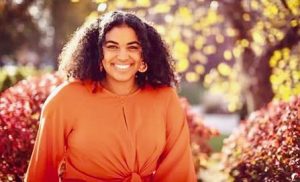 Millikin University graduate Audrianna Bartholomew, Class of 2021, took top honors at the 2022 NextGen National Competition: Finding the Voices of Tomor-row, presented by The American Pops Or-chestra (APO), on Sunday, March 20. Final round performances were held at the David Rubenstein Atrium at Lincoln Center in New York City. While in New York City, finalists participated in rehearsals with APO musicians, attended a Broadway masterclass and attended a Broadway show.

For her final performance, Bartholomew sang “I Wanted to Change Him” from the musical “Hallelujah, Baby!” and “I Put a Spell on You” by Nina Simone. She performed alongside APO principal pianist, Alex Tang, and principal bass, Greg Watkins, and worked with APO founder and Music Director, Luke Frazier.

“It was incredible to be in the rehearsal room as Luke (Frazier) would change accompaniment on the spot and the musicians would follow him,” Bartholomew said. “He prioritized making the contestants feel comfortable and putting forth their best. I couldn’t feel more grateful for the experience of having an all-expenses paid opportunity to be in New York for a weekend and performing with such a talented group.”

Bartholomew was one of 10 contestants to be selected as a finalist (including two alternates) following the semifinal event of the competition that was shared with the public through a private broadcast on Jan. 29. The finalists were announced on Jan. 30. The finalists were chosen by a panel of judges as well as a virtual audience, who received a voting link following the Jan. 29 broadcast to support their favorite semifinalists. The judges were: Broadway actress Aisha Jackson, U.S. Navy Band musician Cory Parker, Metropolitan Opera soprano Brittany Renee Robinson, and Broadway director and choreographer Tara Young.

NextGen is a vocal competition created by APO and Music Director Luke Frazier with the purpose of identifying young aspiring vocalists from across the United States and providing them the opportunity to work with and learn from industry professionals, as well as to perform live with an orchestra. Each year, NextGen participants compete for the chance to win a monetary prize and various paid performance opportunities.

As the first-place female winner, Bartholomew receives $2,000 as well as a paid performance opportunity during APO’s 2022-23 season.

“Beyond winning and working with Luke (Frazier), it was a blessing to meet such established professionals from our masterclass with Tara Young to being adjudicated by Harolyn Blackwell, Jamie DeRoy, Ron Raines and Shanta Thake,” Bartholomew said. “I am so excited to see what this opportunity can lead to in the future for my professional career and looking forward to sharing it with my Big Blue family.”

Ann Borders, who serves as Bartholomew’s voice instructor, said, “It has been my pleasure to support Audri’s work as a student in my Voice Studio. She works hard and she has a specific point of view, specific artistic goals. I look forward to watching her achieve those goals!”

“She is an impressive talent with infectious charisma, and now the skills to back it up. We are all invested in her success and thrilled for her on winning this competition,” said Laura Ledford, dean of the College of Fine Arts at Millikin.

Bartholomew, who earned a Bachelor of Arts in Musical Theatre from Millikin in Dec. 2021, was a contestant on NBC’s “The Voice” back in Oct. 2018 following an impressive blind audition. During the blind audition episode, which aired on Oct. 1, 2018, Bartholomew landed a spot on Grammy Award-winner Jennifer Hudson’s team. Bartholomew later invited Hudson onstage for an impromptu duet performance. Music has always been influential in Bartholomew’s family. She became inspired after singing in church and was influenced by her father, who is a rapper. She speaks two languages fluently and sings in six, and her big musical moment was singing Kelly Clarkson’s “A Moment Like This” at her high school graduation.

With a mission to promote and preserve classic American music, APO requires participants to perform pre-1970 songs and encourages them to sing lesser-known, classic pieces that demonstrate their vocal capabilities and connect audiences of all ages. APO was founded in 2015 with a mission to breathe new life into orchestral pops programming and inspire diverse audiences to discover the wealth of the material in the Great American Songbook in dynamic new ways. Seeing an opportunity to challenge the status-quo of the repertoire an orchestra performs, founder and Music Director, Luke Frazier, created The American Pops with the intent of breaking the mold of the traditional pops orchestra. This new, distinctly “American” orchestra brings together versatile musicians and reimagined programming focused around the Great American Songbook, and presents it with an approachable, fresh spin in order to engage diverse audiences. Through non-traditional orchestral settings, APO aims to deliver popular American classics to those who already know and love them, while also introducing these timeless pieces to younger generations in approachable settings.