During the years I served as Decatur’s mayor, I had a lot of interesting people address the city council during the “Appearance of Citizens”.

Last week, the Decatur City Council voted 5-1 to cut off liquor sales through drive-through or walk-up windows at 10:00 p.m. starting on July 1. The present cut-off time is 2:00 a.m. so it was a significant move for the council and was viewed as another tool to reduce violent crime in Decatur. Those wishing to purchase alcohol after 10:00 p.m. can still walk inside a liquor store and make the purchase.

• THE MORNING after the city council voted to cut off drive-through window liquor sales at 10:00 p.m. we got a call at the Tribune from David Daker who wanted to know if the council had approved reducing the time for drive-through window liquor sales. When he was told the council had approved the measure, he must have had a dramatic reaction (I don’t think he flopped on the floor) because a voice in the background said “That really made your day didn’t it?”

• WORSE? I’ve mentioned before in this column how rough it is to drive on Route 51 heading south from Lake Decatur. Well. longtime friend and former State Senator Duane Noland sent me an email a few days ago indicating that I should “take Christine (my infamous-possessed car) for a ride down Route 48 to Blue Mound and see how that compares to Route 51 South.”

So I did and Christine pulled off on the shoulder of the road after a short distance indicating the road was so rough it made her automative joints hurt!

I keep seeing all of the commercials about the 3,000 miles of road improvements that Governor JB has made since taking office. I assume Route 48 from Decatur to Blue Mound and Route 51 South out of Decatur are not included in those 3,000 miles.

• DECATUR Street Blues — Tom Hanks sent me the following message about Decatur streets: “With all of the lamenting and complaining regarding the ‘potholed’ condition of our city streets here in the Decatur area lately, I recently ran across an old Columbia 78 RPM Record from 1922 in my collection that fits the situation perfectly. 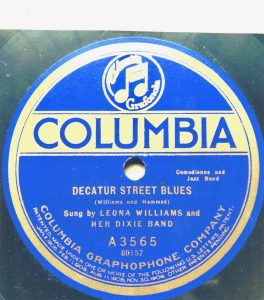 I just crank up my old gramophone and sit back and listen to a very audible version of ‘The Decatur Street Blues’. LOVE IT!”

Thanks, Tom. Wow! A recording from 100 years ago! I don’t have that recording but maybe I can play Jerry Lee Lewis’ “Whole Lotta Shakin’ Going On” as I’m driving on Routes 48 and 51!

• OUCH! I’ve known Republican Congressman Rodney Davis since before he was first elected to Congress and have always liked him and I see no reason that is going to change. However, I am a bit dismayed by the headlines coming out of Rodney’s camp against his 15th Congressional District opponent Republican Congresswoman Mary Miller. The disclaimer shows the attacks are “Paid for and authorized by Rodney for Congress”.

How about this headline on a news release I received on Friday? “Carpet-Bagging Politician Mary Miller Talks Out of Both Sides of Her Mouth, Criticizes $1.5 Trillion Spending Package After Voting for Half of It.”

That’s not real nasty, but probably an indication of what is to come. The Primary Election is in June and this could get a lot nastier between now and then — on both sides.

Remember when candidates concentrated on the reasons we should elect them, instead of the reasons you should not elect their opponents? Maybe attacks on opponents is what works today. I liked it better the old way.

• I join Brian Byers on WSOY’s Byers & Co. every Thursday morning at 7:00.  We talk about all people and issues impacting Decatur.