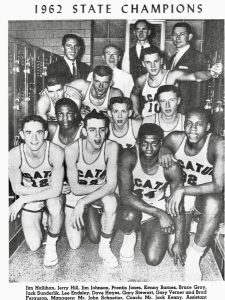 It seems like it happened only a few years ago because I clearly remember watching Stephen Decatur High School’s Ken Barnes standing at the free throw line with the opportunity to beat Chicago Carver in the state basketball championship game at Huff Gym in Champaign. The score was tied at 48 with only six seconds left and Barnes was fouled and he was going to shoot two free throws. I was not in Huff Gym but was watching the game on a small black and white television and I remember thinking that Kenny looked like the calmest person in the whole state before he was given the ball and eyed the basket. He made the first (he missed the second) but one free throw was all that was needed for the Reds to win the game and the school’s fourth state championship — its first under the “Stephen Decatur” name. (My “Scrapbook” on pages 4 and 5 of the print and online editions is about the championship team and game.)

A few months after the championship victory I saw Barnes in a hallway at Millikin University where both of us were attending an informational meeting involving many area young people. I asked him about what was going through his mind when he was standing at the free throw line, knowing that a made free throw would win the state championship? He replied that all he was thinking about was he needed to make at least one of the baskets.

• IF I REMEMBER right, all of the members of that 1962 championship team went on to college and graduated with degrees ranging from bachelor to doctorate. It was a special team. Forty-five years later, the SDHS Class of 1962 held a reunion in Decatur. I was Decatur’s mayor then and I was invited to say a few words and present a mayor’s proclamation to the class and team at the reunion. I have to admit that one of the most enjoyable presentations and proclamations that I did during the years that I was mayor, was being a part of celebrating that class and team in 2007. I enjoyed listening to the friendly conversation and jokes between classmates and teammates and as I looked around the room I saw other familiar faces of people in that class who were very successful in our community and beyond. It was a great evening.

• KEN BARNES, who was a dominant presence at that reunion (as one might expect) passed away only four years later in Rockford in 2011. Barnes retired in June of that year after 40 years as a teacher and coach at Rockford Auburn High School. • COACH John Schneiter, who was at the 2007 reunion passed away in 2014. He was only 27 when he coached Stephen Decatur to the state championship — the youngest coach ever to win that honor at the time. It may be a record that still stands, although I’m not sure as I’m writing this column.

• JIM HALLIHAN and I corresponded in recent years. He also held a :Character Counts” meeting in Decatur in 2019 which served as a reunion for members of the 1962 team. My late Sports Editor J. Thomas McNamara covered the meeting and shot several photos. Before the meeting Jim sent me an email, which read: “While going through an old scrapbook that my wife had redone, I found the article, photos and certificate from the reunion that you MC’ed when you were mayor. Sure wish Barnes could be here for this one and Coach Schneiter also.”

Following the meetings of the “Character Counts” gathering, Jim stopped by my office to chat and brought me one of the red and white caps that celebrated the 1962 state championship. It is a prized possession of mine. When he came to Decatur he also brought a big jar of tomato juice that his wife, Trish, had made and, although I like my V8, I will have to admit, what Jim brought me was the best tomato juice I’ve ever tasted.

It wasn’t long after I saw Jim that he found out he had cancer. He died the following year from sudden complications due to metastatic cancer on Nov. 20, 2020 at his home in Ankeny, Iowa. His obituary was printed in the Decatur Tribune and it was apparent that his life had been highly successful with a strong faith in God, a great wife and family and career. .

• SCHOLARSHIP — Last July, Trish Hallihan, sent me the following information that I printed in the Tribune, but, considering this year marks the 60th anniversary of that special SDHS team I want to print it again because it speaks so much to what that team was about. It also shows that Jim Hallihan didn’t forget his hometown of Decatur as one scholarship will go to a student at one of Decatur’s high schools.

“Please join us in honoring our husband, Dad, Papa, brother, uncle and loyal friend, as we begin the Jim Hallihan Character Legacy Scholarship through the Iowa Sports Foundation. We want to take our deep grief and broken hearts and try and do something we know he would have championed and encouraged. He believed that good character was even more important than grades, success in sports, or excelling in other talents. He believed in mentoring young people and often talked about the biblical principle of how challenges in life create perseverance which builds character and leads to hope.

“The scholarship will provide applicants the opportunity to share some of those challenges and experiences where their character was tested, and they prevailed with good decisions and caring actions. We hope to provide opportunities for first generation college students and/or underrepresented populations on a college campus. Through their stories and narratives the focus will be on their community service, volunteering, involvement in religious organizations and schools, and references of good character as priorities. “One recipient will be chosen from an Iowa high school to honor Jim’s work with youth in Iowa, and another recipient will be chosen from a Decatur, Illinois high school to honor his hometown. Our goal is for high school seniors to begin applying for this scholarship on January 5, 2022, which would have been his 77th birthday.

“Our hope is to continue his legacy by awarding this scholarship every year, for years to come.”

• I THINK about everyone knows that Jack Kenny was the assistant coach of that 1962 championship team. Jack went on to become principal of Stephen Decatur High School and was also elected to many terms on the Decatur Park District Board before choosing to not run for re-election and retiring from the board a few years ago. I saw quite-a-bit of Jack in meetings between the mayor’s office, the city council and the park board. Jack is still a familiar and highly respected resident of Decatur.

• A FEW other members of that 1962 team remain in Decatur and others live in other communities. Some subscribe to this newspaper and, after all of the years that have passed, whenever I happen to see one of their names on an email or renewal statement, the first thought that passes through my mind is of that 1962 state championship team — and that special time when it “won it all” and made Decatur so proud. It remains one of Decatur’s proudest and most exciting sports “moments in history” — and it hasn’t been repeated by a Decatur public high school since that time. What made it even more significant was it happened when there was only one class and all the schools, large and small, competed for that championship.

• I JOIN Brian Byers on WSOY’s Byers & Co. every Thursday morning at 7:00. I always enjoy talking with Brian about what is happening in our city and beyond.