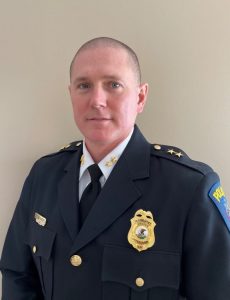 Mr. Brandel has been a member of the Decatur Police Department for over 24 years, and like Chief Getz before him, Brandel rose through the ranks of the department, starting as a patrol officer; he is intimately familiar with all operations and functions of the department.

“Shane brings vast local knowledge and broad law enforcement experience to this job,” said Wrighton, “and I am certain he is ready for this new assignment. I am grateful he has agreed to take this job at such a critical time. I am also looking forward to having Shane on the city’s senior management team, and working closely with him as we plan for and evaluate the future course of the Decatur Police Department.” Wrighton also said that “Chief Jim Getz is a consummate law enforcement professional and I wish he had stayed in the Chief’s job for several more years; he will be hard to replace. But I am also thankful for how Jim engaged in careful succession planning, and that he has prepared his team for situations like this.”

Mr. Brandel, 46, holds a bachelor’s degree in law enforcement and justice administration from Western Illinois University, and a master’s degree in criminal justice and criminology from Indiana State University.  In addition, he is a graduate of the Northwestern University School of Police Staff and Command. He currently holds one of two deputy police chief positions in the Decatur Police Department’s command structure. Chief Getz and Deputy Chief Brandel have worked together closely for many years, and both men anticipate a seamless transfer of management at the end of July.

The designation of “Interim Chief” will be used for several months as the community is more fully introduced to Mr. Brandel, and as some changes are made to the department’s command structure. Mr. Brandel will be a candidate for the permanent position of Police Chief.

“I am thrilled and ready to step into this important leadership position,” said Brandel, “and I believe I can bring new and innovative ways of providing quality law enforcement and safety services to our community in these turbulent times.”