Patrick McDaniel’s service on the Decatur City Council has ended with the swearing in of newly-elected Ed Culp to take his place at Monday night’s meeting.

Pat, a long-time friend and a past reporter for me at this newspaper, served ten years as a city council member and was mayor pro tem when he retired from the position. In addition, since Councilman Jerry Daw-son retired from the council, Pat has also been liquor commissioner (taking Dawson’s place), a position that he will keep during the transition period. He is also being appointed to the City Plan Commission, so he will still be involved in city government.

It seems like only yesterday that Pat was in my office at the Tribune telling me that a position on the council was opening up and he was going to try again to be elected after two previous unsuccessful attempts. The third time was a success and Pat was elected and has been re-elected over the past decade. 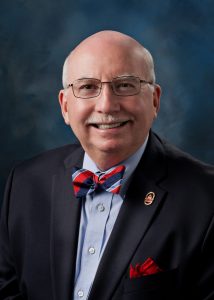 • I TALKED with Pat McDaniel on his last full day of being a city councilman and he told me: “I have always been proud to serve the residents of the Decatur on the city council for the past ten years and in promoting the city not only within the city but also as I traveled throughout the state attending various meetings and events.

“I found that, as any elected leader making all citizens happy, on how I voted on city issues that came before the council was always a challenge. I made my decisions on how I voted on an issue based on studying very carefully the information I received from city staff on any issue before the council, getting input from citizens and businesses, reaching out to other city government officials of other Illinois communities to see how there city dealt with a similar issue, and then adding a lot of good old common sense in deciding how to vote.

“My philosophy as a council member for ten years has always been to take care of the small day to day issues that affect Decatur residents and local businesses but never fail to keep an eye on the big picture in what the community needed to move forward not only for the present generations of citizens and existing local business but for the future generations of citizens and business who would call Decatur home in the future.”

• THANKS, PAT, for your years of service to the community during some difficult times. I know that you have experienced some serious health problems in recent years, but you didn’t let that keep you away from fulfilling your obligations as a councilman. By the way, Pat’s first attempt at public office was when I ran for mayor and he was one of my opponents in the primary election. Pat and Councilwoman Betsy Stockard lost in the primary, but Pat immediately joined my campaign committee and worked to help me win again in the general election.

• IN ADDITION to newly-elected Councilman Ed Culp being sworn into office to replace Pat McDaniel at Monday evening’s council meeting, Chuck Kuhle and David Horn were sworn into office after being re-elected to four year terms. Councilwoman Lisa Gregory replaces McDaniel as mayor pro tem after receiving unanimous council approval. McDaniel was honored at Monday night’s meeting for his years of service.

• SAD to read the news that long-time Decatur attorney and community leader Robert Roberts passed away recently. (His obituary is on page 21 of this week’s print and online editions.)

I knew Roberts through his leadership in several organizations and seeing him downtown where he had his law office for so many years. One of his daughters, Claudia, was an intern for me at the Tribune many years ago while she was attending Millikin University.

My condolences to Claudia and the Roberts family on their loss.

• I HAD to set up an appointment in order to get into the lobby of a local bank where I do business. I had not been in the lobby since the bank locked its doors to the public when the pandemic began. I’ve been using the drive-through tellers, which is fine. However, this time, I needed to get inside the bank for this transaction so I called and set up an appointment. When I arrived outside the bank, I pushed the outside button to signal that I was outside waiting to be let inside. After gaining entrance, I mentioned to one of the bankers that, if someone would have told me two years ago that I could stand outside a bank’s locked door wearing a mask and still be buzzed inside, I wouldn’t have believed them!

When COVID-19 is no longer a threat and the pandemic is over, I think many of us will look back on this time of masks, isolation, social distancing and daily health reports and wonder if all of that actually happened or if it was just a bad dream.

• LET’S SEE, the election for Macon County Sheriff was held 2 1/2 years ago — and we are still, as I’m writing this column, waiting to find out who really won!!!!!! This is ridiculous and certainly not fair to Sheriff Antonio D. Brown, who was sworn in as the winner of that election and still has some people wondering if he actually won, or to Jim Root, who many people believe narrowly won that election. The votes have been recounted and, at last word, we are still waiting on a judge’s decision to make it known which candidate in the sheriff’s race actually won.

It’s often been said that the “wheels of justice” turn slowly, but the wheels in this case have four flat tires! Oh, by the way, the sheriff’s office will be up for election next year — and candidates for the office will be making their candidacies known in a shorter time than that — probably later this year. Hopefully, there will be a decision before the next election rolls around and we try to convince people to turn out in big numbers because their vote counts!

• ONE candidate for Macon County Sheriff in the 2022 election has already made his candidacy known. Former Sheriff Howard G. Buffett has filed a Statement of Organization with the Illinois State Board of Elections establishing “The Committee to Elect Buffett for Sheriff” with the intention of seeking the office of Macon County Sheriff in 2022. Buffett will make a formal announcement at a later date. Former Sheriff Thomas P. Schneider is the chairman of the Committee to Elect Buffett for Sheriff.

• ON FRIDAY, May 7th, from 9:00 a.m. to 6:00 p.m. the Illinois National Guard is planning to bring 600 doses of the Johnson & Johnson COVID-19 vaccine to be administered at the Macon County Health Department, 1221 E. Condit Street in Decatur For this session, any resident of Illinois is eligible to receive this single-dose vaccine who is 18 years of age or older and he or she should NOT have previously received a COVID-19 vaccine dose of any kind. Eligible persons can visit https://events.juvare.com/IL-IDPH/3659d9e4-bdbc-4783-85ec- 5cb7fed7757a/ to schedule an appointment. According to the instructions from the Health Department, before arriving to the clinic, you should take your temperature and screen yourself for COVID-19 symptoms.

“If you have a temperature greater than 100.4 degrees, are experiencing any symptoms or signs of illness, are awaiting a COVID-19 test result or have been identified as a close contact of a positive COVID-19 case, do not attend the clinic.

If you haven’t been vaccinated, here is another opportunity. We really need to get the vaccination numbers up in Macon County and the availability of the vaccine in so many places in our community leaves those who haven’t been vaccinated with plenty of choices about where to get their shot. We have the weapon to battle COVID-19 that we didn’t have 14 months ago in the form of the vaccine.

• DISTRACTED — The Decatur Police Department announced it issued 23 hands-free cell phone citations during the April distracted driving enforcement period. “We strongly enforce distracted driving laws for one reason – to save lives,” said Sgt. Steve Hagemeyer. “Choose to drive distracted, and you’ll have a phone in one hand and a ticket in the other.”

The Decatur Police Department joined forces with state and local law enforcement and highway safety partners for this enforcement effort. U sing your phone in anything other than hands-free mode in Illinois is not only dangerous, it is illegal. Break the cycle. Drop It and Drive. The Illinois distracted driving campaign is funded with federal traffic safety funds administered by the Illinois Department of Transportation.

I don’t know about you, but I still see a lot of drivers talking on hand-held cell phones and it makes me wonder where their focus is while driving.

• A BIG Happy Mother’s Day on Sunday to all of our mothers near and far. One of Abraham Lincoln’s most famous quotes is: “All that I am or ever hope to be, I owe to my angel mother.”

Lincoln had another, less well-known quote, but no less powerful about his mother: “I remember my mother’s prayers and they have always followed me. They have clung to me all my life.”

• I JOIN Brian Byers on WSOY’s Byer & Co. for the City Hall Insider portion of his show every Thursday morning starting at 7:00. I always enjoy talking with Brian.