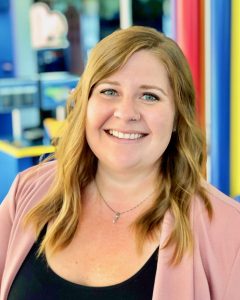 Abby Koester has been named President & CEO at Children’s Museum of Illinois. Koester assumes the position after serving in an interim capacity for the past 8 months. Former President & CEO Amber Kaylor departed in August of 2020. Koester has been responsible for the museum’s survival through a thirteen month shutdown due to pandemic guidelines, a fact that was not lost on the museum board who voted to keep her in the leadership position.

“Several museums across the country were forced to close permanently due to the shutdown, including some in neighboring communities” says board chair Christina Bolsen. “Abby worked to ensure Children’s Museum of Illinois was in a position to survive.”

The museum reopened to the public on April 23 at 25% capacity, as per IDPH and Restore Illinois Guidelines. Koester says welcoming families back is a sigh of relief to staff and board members, though cautions that the hard work of rebuilding the museum back into pre-pandemic stability is far from over. “The reality is we have got a long way to go to be fully recovered,” says Koester.

Koester graduated from Indiana State University with a degree in Recreation and Sports Management, and a minor in Non-Profit Management. Previously she served as the Program and Special Event Coordinator for over six years at the Terre Haute Children’s Museum. She has been with CMofIL since January 2016.

Bolsen is optimistic for the museum’s future. “Abby has a fantastic team in place and a clear vision. Her innovative ideas and hands-on approach have already served the museum well.”

The museum remained closed for much longer than other businesses like restaurants or retail due to specific language in the Restore Illinois Guidelines. Koester, along with other museum leaders in the state, worked with lawmakers to allow industry-wide reopening for museums. Koester is pleased to be open again, even at a quarter of capacity.

“The building was empty for so long,” she says. “Seeing all the excited faces, on both kids and adults, was a pretty incredible experience.” Now work begins on getting the museum back on its mission to enhance the community through the informal education of the Arts & Sciences. “We did little things to stay on mission during the closure, what we could with the small on-hand staff we had, but it was a far cry from what we were built to do,” Koester says. “This is the beginning of Children’s Museum of Illinois getting back to where we can fully carry out our mission.”