• AS MANY area residents are trying to stay safe during the COVID-19 Pandemic, they are turning to online shopping to avoid inperson purchases at local stores. That’s not only a negative for local stores and their owners, online shopping is also a danger zone where scammers and hackers await to deceive and dislodge people from their money. That’s the subject of my “Viewpoint” column on page 3 of this week’s print and online editions as I give some examples of scammers using well-known brand names to secure personal information from those ordering online. Others make false claims about how they secured a personal email address to draw a consumer into giving up confidential information. With so many people ordering through Amazon this Christmas season, scammers pretending to be Amazon, are securing personal account information and other confidential details in order to use that information for their own benefit. Be especially careful this holiday season because it is easier than you think to get scammed out of your money by those people who don’t have the holiday spirit in their hearts.

• LAST CASE — I saw Macon County Presiding Circuit Judge A.G. Webber in the lobby of the downtown post office Saturday morning and he told me that he had completed his last case before his retirement this month. As we chatted (through our masks) I could not help but think how quickly time has gone by since he was first appointed to fill the seat of a retiring judge in 2001. He said, over the years, some cases were much tougher than others and he felt, after 19 years, it was time for him to retire.

I’ve known and appreciated Judge Webber for many years and he never seems to age despite all of the cases he has heard. He has occupied a position that few people in our county get to hold and I believe he has done an excellent job over the years — not only as a member of the judiciary, but as a person. He told me his future plans and I think I’ll being seeing more of him in the 100 block of South Water Street, in the future. Judge Jeffrey S. Geisler was elected to fill the vacancy from Judge Webber’s retirement in last month’s General Election.

Thanks for the info, John. “Tiny” created a “Big” impression on a lot of area residents so many years ago.

• SHOE SHINE — Life-long friend Dick Cain of Decatur also has memories of Tiny Hill. Dick sent me the following email: “Your feature about Tiny Hill brought back memories of my childhood in Sullivan. In 1953-54, I worked at a barber shop as a shoe shine boy. A barber that worked there had grown up with and was a life long friend of Tiny Hill.

“When Tiny came home for a visit, he would generally bring in 8-10 pairs of shoes for me to shine. Keep in mind that this was before men entertainers were wearing patent leather shoes. The price of a shoe shine was 15 cents back then. Tiny was far more generous! Thanks for the memories.”

• CROSS GONE — Christine B. sent me the following email with an interesting question: “I am a subscriber and I was wondering if you can supply me some information I’ve been curious about. When did they take the large cross off of the WAND tv tower and why?”

It seems to me that it has been gone for quite awhile. I remember when the late Dr. William C. Ellis of Peoples Church of God would officially turn the light on to begin the Christmas season. Other members of the clergy also turned it on, but it seems to me that Bill was the most frequent “illuminator”.

Can anyone offer some “illumination” on when and why the lighted cross disappeared from the WAND-TV tower? If you know, email me at decaturtribune@aol.com or write to me at P. O. Box 1490, Decatur, Illinois 62525-1490. I may have known at one time but I can’t remember everything — there’s just too much to remember. (smile)

• FAVOR? One of our readers recently asked in an email: “Hi, Do you have an account with Amazon? Thanks,”

I have notified the reader that her email account has been hijacked because others have written the same message in the past for the same reason. It is to get me to buy something for scammers from Amazon and “they will repay me”.

• THANK YOU — Ann Irwin, Director of Operation Enduring Support (OES), sent me the following message to all who supported the effort: “Operation Enduring Support mailed Christmas Care Packages to our De-ployed Military early on November 23, due to all the Covid closings. Due to your generous donations we were able to mail 143 packages and this is a total of 311 mailed during 2020. These packages were sent to our men and women stationed in Iraq, Kuwait, Japan, Horn of Africa, Djibouti, South Korea, several ships at sea and many undisclosed locations. Thank you for your support of our Deployed Military.”

Thank so much to Ann and all who have worked in the Operation Enduring Support effort which has brought so much cheer to the men and women of our deployed military over the years,

• INTERESTING — I received the following email from local attorney Gary F. Geisler about a new series: Gary wrote: “I wanted to let you know that I have begun a series of digital discussions through the Decatur Library Local History Room. Last week we had a discussion about Dennis School. We talked about the history of the school, the many changes, memories of the building, the teachers and events that stay with us years later.

“There will be more. There is any number of people, places and events that happened here in Decatur and should be explored again. I make a point of finding photographs that help tell the story and bring back memories. On December 15 at 7 pm cst, we are having the next digital discussion about the Decatur Firestone Tire Plant. The history of the plant, its opening and closing. The events that occurred. And most importantly, the great comradery of the people who worked there. It’s a delicate story with a sad ending. But hopefully we can take a fresh look at a plant and its people that meant a lot to Decatur.

“Given your tremendous interest and knowledge of Decatur and its history, you would be a valuable participant. I hope you can join us Paul.”

I really appreciate the invitation but will not be able to participate in this one. However, if you are interested in Decatur’s history (I know most of you who read the Tribune are Decatur history buffs) Rebecca Damptz, CA, Head of Archives and Special Collections at the Decatur Public Library, sent me the following information for you to get connected: “The Firestone Zoom program will be held on December 15 @ 7pm via Zoom. “People can RSVP here: https://www.decaturlibrary.org/events/21027/remembering-the-decatur-firestone-tire-plant .

“We’re also recording each of these discussions and posting them on our YouTube page, so if anyone misses the live event, they can catch it at their convenience.” 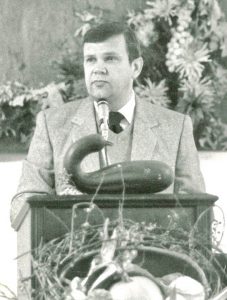 WHO IS THIS GUY? John Smith emailed me the above photo with the words: “Had to send this to you. Saw it Thanksgiving Day on Herald & Review website.”

The photo is from the 1984 Community Thanksgiving Luncheon and it caught me wondering for a few seconds who the guy was until I realized it was me! I didn’t realize I had changed so much in 36 years! It is hard to remember a time when my hair was so dark. Back at that time, the annual Community Thanks-giving Luncheon was held at the Masonic Temple and I was the speaker that year.

Thanks, John, (I think) for sending me the photo and thanks to the H&R for using it as part of the city’s Thanksgiv-ing past.

• DIFFERENT — This Thanksgiving was the first time in my life that I didn’t spend it with some members of my family. My wife and I continued to stay safe and not get together with any other family members as advised by medical experts to help stem the spread of COVID-19. It appears the same will be true for Christmas because, at this point, the numbers of infections, hospitalizations and deaths from the virus continue to rise in Macon County and across most of the nation. It is a rough time to be away from loved ones but I want us to have future Thanksgivings and Christmas holidays to be together by playing it safe now.

• CONGRATS to J. Thomas McNamara on starting his 45th year last week as my sports editor for the Decatur Tribune. During all of those years, Tom has never missed a deadline for his copy to be on my desk, or my computer. As publisher I can tell you how important it is to have a writer that is always on time. regardless of the circumstances. Thanks so much for your coverage of sports for the Tribune, Tom.

• I HAPPENED to pass by the WSOY studio downtown the other day and realized that I haven’t been in the studio to do the City Hall Insider part of the Thursday morning Byers & Co. show at 7:00 since last March! However, I’m pleased that Brian and I have continued discussing the issues of the day via phone each Thursday since the pandemic began.